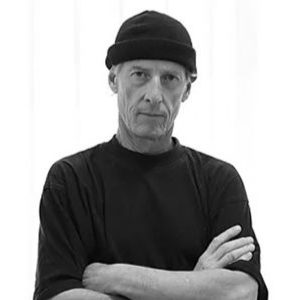 Norman Catherine was born in East London, South Africa in September 1949. He studied at the East London Technical School of Art and held his first solo exhibition in 1969. This exhibition consisted of oil paintings on wood, bone, wire and an assortment of found objects. The following year he began his career as a commercial artist in Johannesburg.

Shortly after his first exhibition in 1969, Catherine began collaborating with Walter Battiss on the project ‘Fook Island’. This project involved the building of Fook Manor at Hartebeespoort Dam, designing murals and merchandising. For a period of almost 20 years, he prepared the design of a book with Allan Cameron entitled “The Legend of Memo the Hierophant” which was finally published in 1995.

Catherine spent time overseas, in New York and Los Angeles, working on various projects. One of these projects was the animation for Stravinsky’s L’Histoire du Soldat. He has represented South Africa in major international exhibitions such as the Venice Biennale and Art Basel, and has been included in numerous important shows in New York, Los Angeles, London and Berlin.

As both a sculptor and painter, Catherine works in an assortment of media, ranging from oil, acrylic, watercolour, and airbrush; as well as wood, fibreglass, wire, and metal. He incorporates surrealistic elements into his work, and uses humour with a dark overtone to confront the horrors of apartheid.

Catherine’s art has undergone several metamorphoses over the last 40 years. Each passing decade was characterized by different features, from the airbrush paintings of the 1970s, to the mixed media works of 1980s. His work in the late 1980s was characterized by wire sculptures and tin cans, and his paintings from the early 1990s set the tone of future artworks, which have been described as a “pre-millennial menagerie of anthropomorphic beasts”.

In the thirty years spanning his career, Catherine’s visual trademarks have included rough-edged comical and nightmarish forms, rendered in brash cartoon colours. He has had 25 solo exhibitions and his work is displayed in numerous public and private collections, both locally and internationally.