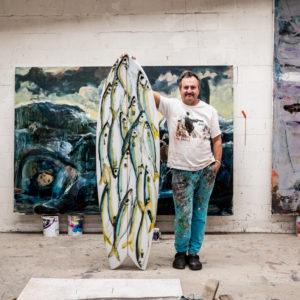 Beezy Bailey (born 21 July 1962 in Johannesburg) is a South African artist who works in various media, including painting, sculpture, drawing, printmaking and ceramics. He has been a full-time artist for 30 years, with over 20 one-man shows in London, Johannesburg and Cape Town as well as numerous group shows around the world.

He received a fine art degree from Byam Shaw School of Art in London in 1986, after studying two years of life drawing and then a third in printmaking, painting and sculpture.

Beezy Bailey is married with two children and lives seasonally in Cape Town and London.

Born of the frustration of ‘increasingly prevalent affirmative action’ in the art world, Bailey submitted two artworks for a triennial exhibition in 1991. One was with the traditional Beezy Bailey signature (rejected), and the other signed Joyce Ntobe, a female alter-ego Bailey had created for himself. The latter now enjoys an honoured place in the Iziko South African National Gallery as part of its permanent collection.

When the curator of the Gallery wanted to write a paper about three black women artists, Joyce Ntobe being one, Bailey let the cat out the bag, which caused a huge media scandal..

“Whimsical, wistful, mystical, mercurial”. These are a sampling of the epithets describing the work of Beezy Bailey. They also aptly encapsulate Bailey himself, whose multiple artistic personae mingle and merge fluidly with his art. Bailey demonstrates his chameleon-like mastery of various visual media and genres.

Bailey is one of those artists who does not shy from exploring and exploding the boundaries of identity. In fact, his unashamed embrace of duality is one of the galvanising forces of his art. As suggested by ‘Clear as Milk’- the title of one of his “surf” paintings, things are never quite what they seem. Water might be sky, fish might be feathered … and always the twain shall meet.

The documentary called “Outsider” by Deepend Films documents Bailey’s life story, from his formative years to his 30-year career in the arts. This film also takes a look into his successful and often controversial life.