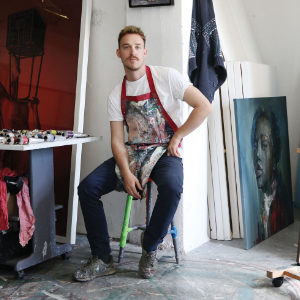 Christopher Denovan was born in Cape Town, South Africa in 1983. In 2005 he graduated with a Diploma in Fine Art (majoring in Painting and Printmaking) from the Ruth Prowse School of Art. Chris then went on to study at The Animation School in 2006 and graduated with two certificates in Autodesk Maya and Autodesk 3ds Max, respectively. He also went on to win The Best Concept Characters Prize during his time at The Animation School. His experience in animation would subsequently have a significant impact in his approach to art.

In 2011 Chris began to focus on his art and started his painting career. He has gone on to exhibit in various group shows in South Africa, including, among others, Studio 41, Salon 91, and The Irma Stern Museum. In 2014 Chris was short-listed in the Vuleka Competition for his portrait entitled Kouros.